My first game jam was also the first Global Game Jam. There were 12 participants at the Otago site who were a mixture of industry professionals and students. There was even a keen kid who was interested in game development who had travelled down with his mum to learn how it worked. I was just starting 3rd year computer science and keen to try out my skills.

Once we got theme everyone came up with ideas for the theme of 'As long as we have each other, we will never run out of problems.' then split into groups. My group was another 3rd year student Mark, professional artist Joel and the keen kid's mum Glenda. We decided to make a game about bringing your drunk friend home from town.

The game would be split into two phases, first would be in a bar and you would have to grab drinks coming along the bar. This would set your difficulty. The second part would be navigating the streets pulling your friend along and trying to stop them running into things. It was pretty amazing working with an artist. He drew some initial concept art of the two characters and they were all awesome. After he had made final hand drawn art, he scanned it in the finished them on the computer. I don't have a good handle on what his process was because it was all new to me. He asked us if we wanted a sprite sheet as the output but Mark and I didn't know how to use that so we got all the frames as individual images. 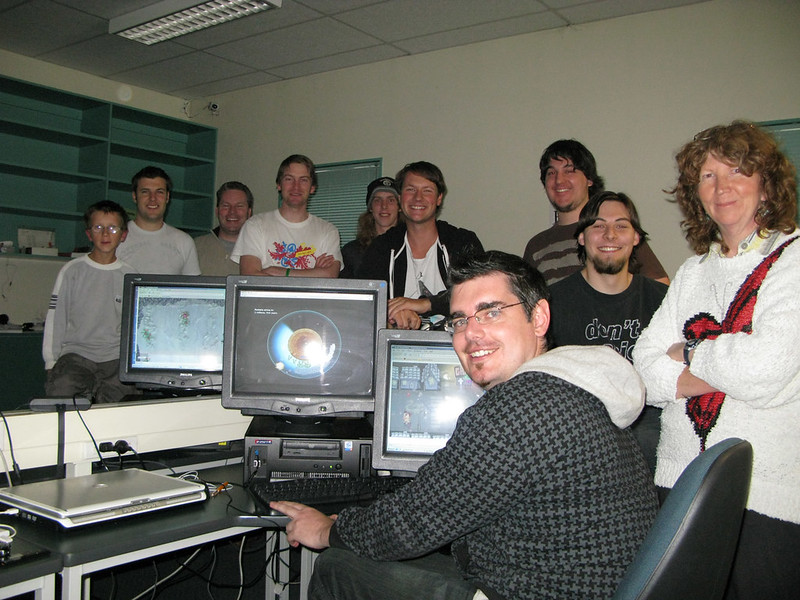 Unfortunately for Joel, the programming was not quite up to his professional level. We had only done group work by pair programming so hadn't used version control yet. We split the game into me doing the bar part and Mark handling the walking physics. This let us email files back and forwards without too much merge hassles. There were three words we had to include in our game somewhere and these became drink posters which the player could choose. Once a drink was chosen it would slide along the bar. The player needed to hit the button at the right time to grab and drink it or it would slide off the end. Once they had done three drinks they would move onto the next part. It seemed like it was best to grab the drinks but this was actually increasing the difficulty for the next part.

Mark got the physics working for the player and their friend. There was a spring between them so you could drag them around but they would pull back on you. The friend was attracted to items such as bins and letter boxes and would move towards them. When they knocked them over your friend no longer found them interesting so it was easier to pull them in the direction you wanted. On the Saturday this was some squares with a line between them and it didn't look very finished. When we added the art suddenly it came to life. The feedback on the animations was really positive and it had so much personality. We decided to make you traverse through a number of screens before your home. In deciding how it would work, we had the inspired idea for each screen to be a corner. This meant that we could have two sets of roads, horizontal or vertical start and alternate them giving a randomly generated path.

Sunday was focused on the final polishing. The assets for all the items got in. Joel drew the controls as graffiti on the ground which I really liked. We even had a bit of time to make achievements based on what you knocked over on your journey. To find music with a good license we found them in wikimedia commons. Overall it came together really well and ended up quite polished. To host it on the web we made it a Java applet. Unfortunately with the march of technology, browsers no longer want to run such a thing.

It was awesome working on my first proper game, doing a cool team project and being in an environment with such great energy. It was also great to see how professionals worked and used their tools. The game jam even ended up getting a mention in the local paper. It was also the game that set me on the game making path that I am still on today.

Game Jams are fun!
Art makes a huge difference.
Stretching yourself means you learn a lot.