The Power of a Vision

A vision statement is an important part of a project. It frames what success looks like and allows everyone working on the project to be aligned. There are always hundreds of decisions for each person to make, and having a clear vision of where the overall project is heading helps make those answers clearer.

A good vision statement has a clear and achievable goal, a time frame and highlights any constraints. A great example of one is from President John F. Kennedy on going to the moon.

President John F. Kennedy's message to the joint session of the Congress, on May 25, 1961

I believe this nation should commit itself to achieving the goal, before this decade is out, of landing a man on the Moon and returning him safely to the Earth.[1]

This powerful sentence sums up everything for a project that would take the largest commitment of resources ever made by any nation in peacetime[2]. On July 20, 1969, the goal was achieved with the words 'One small step for man, one giant leap for mankind' - Neil Armstrong[3]. By looking at this statement, we can see how it covered all the requirements and helped lead to a successful project.

It was a huge effort that the whole nation directly contributed to and needed to be aligned on. In his speech, he came back to this point repeatedly, referring to the 'decision that we make as a nation'[1:1] and the choice which this country must make'[1:2]. NASA ended up employing over 400000[4] as well as the billions of tax payer dollars[5].

Some projects can be a success even if the overall goal is not achieved. Other times, the goal is all or nothing. JFK realised this was the second case, saying later in the speech that 'If we are to go only half way, or reduce our sights in the face of difficulty, in my judgment it would be better not to go at all.'[1:3]. In the case of landing a man on the Moon, the difficulty in achieving the goal is a motivator for the project. No single space project in this period will be more impressive to mankind, or more important for the long-range exploration of space; and none will be so difficult or expensive to accomplish.[1:4]. This point was later famously summed up at a speech at Rice University in Houston in 1962 'We choose to go to the Moon in this decade and do the other things, not because they are easy, but because they are hard' [6].

Having a timebox to achieve a project helps shape the solution. Options which will fall outside the time can be discarded and it can increase the focus on what is really required to meet the goal. The timeline for this project was quite aggressive. The first crewed NASA flight had only just taken place earlier that month [7]. There were some doubts over whether this timeline could be met [8]. The timeline required other projects such as space station plans to be put on hold, new buildings constructed and a streamlined org chart[9].

The main goal of the project should be really clear as well as obvious when it has been achieved. Having the second clause of 'returning him safely to the earth' is important because of the Tyranny of the Rocket Equation[9:1]. Basically to lift mass you need fuel. The further you want to go, the more fuel you will need. Then you also need to lift the weight of the fuel which requires even more fuel. This means the actual payload percentage of a rocket is quite low. 'The Saturn V payload to Earth orbit was about 4% of its total mass at liftoff. The Space Shuttle was only about 1%.[10]'. If they only needed to make a one way trip, the requirements would have been far lower as everything needed for the return trip has to be hoisted up in the first place. Having the requirement front and centre means that no one will make an assumption and meet the strict definition of the goal and timeline with unintended consequences.

The timeline and weight requirements pushed NASA towards a riskier Lunar Orbit Rendezvous[11]. 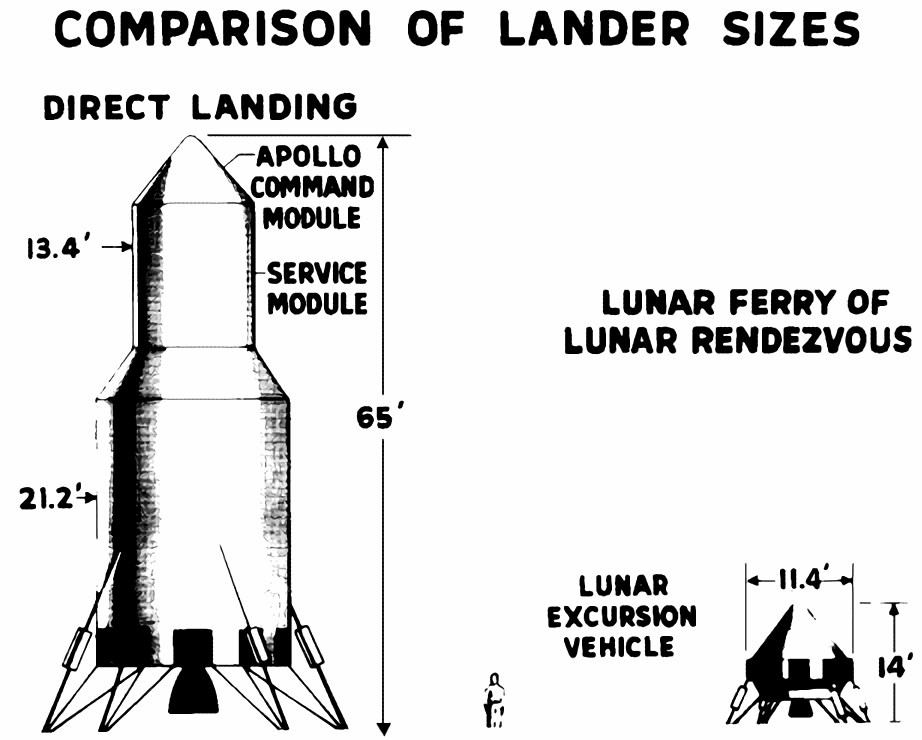 As you can see from these two images, the Lunar Orbit Rendezvous has far lower weight requirements. It ended up being easier to solve the complicated docking maneuvers required, both in Earth and Lunar Orbit, than create a rocket capable of lifting the enormous weight for a Direct Landing. Even so, it ended up being a controversial option within NASA that took time for everyone to come around to[11:1]. 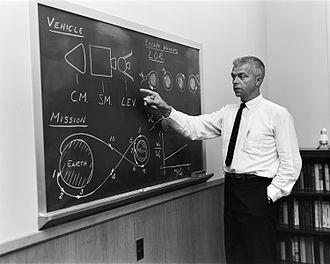 John Houbolt, one of the chief proponents of the Lunar Orbit Rendezvous

Overall this is a powerful vision statement, that sums up what needs to be achieved, the time frame required and getting everyone on board with the plan. The only downside is unnecessarily limiting the solution to requiring a man. The head of Astronaut testing, Dr William Randolph Lovelace, tested female candidates through the same series of tests. One of these, Jerrie Cobb 'scored in the top 2% of all candidates of any gender, outperforming some of the Mercury 7 astronauts'[12]. As we saw above, sometimes the best option is not obvious at the outset, and limiting the solution space early can harm the project overall. Women would contribute in many other areas of the Apollo program but it wouldn't be until 1983 that Sally Ride would be the first woman NASA put into space[13]. 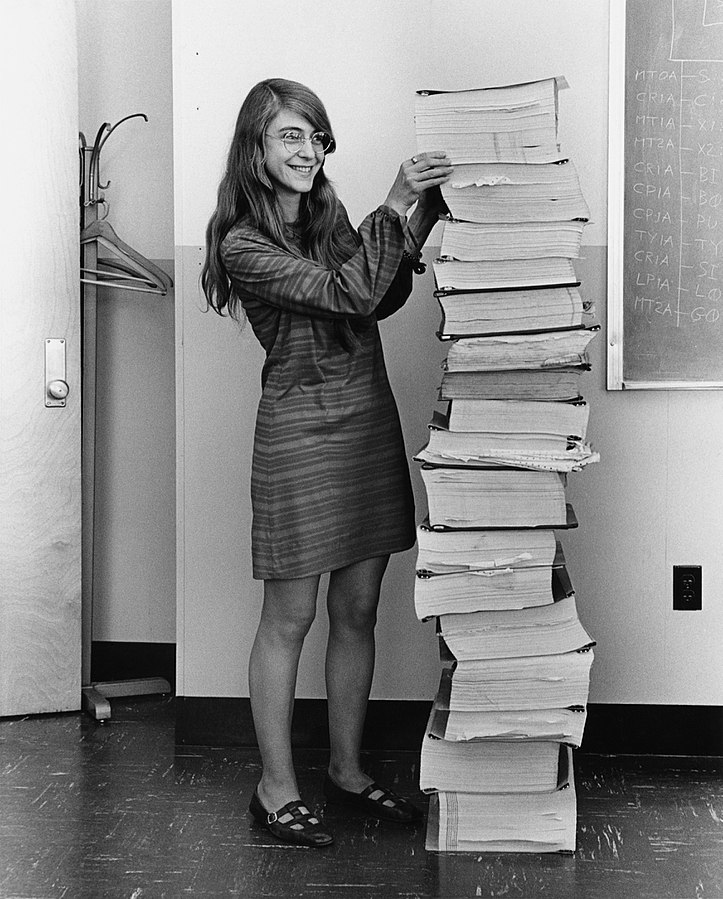 Margaret Hamilton, Director of the Software Engineering Division of the MIT Instrumentation Laboratory, standing next to the software that she and her team created for the Apollo project.

So the next time you are coming up with a vision statement, or are given one on a project, you know what to look for. Make sure the goal is clear and you know what success will look like. See that it includes who will need to be aligned and the time frame that it needs to be achieved by. Finally, make sure it highlights any critical assumptions to avoid expensive misunderstandings. Having a great vision statement wont guarantee success, but it will set you up well for the start of your project.

This blog post is adapted from my talk 'Improve at agile by looking at rockets'.